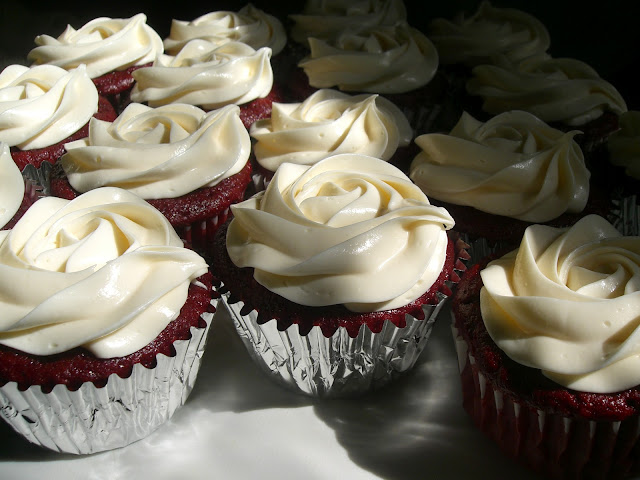 I've been in a really dessert-y mood lately, so please forgive all of the sweets! I hope to post more savory dishes soon. These are red velvet cupcakes that I doctored up from a box. I don't normally use boxes when baking, but Sam wanted to these and I couldn't refuse. I looked around at how to veganize a cake mix and eventually just did my own thing. It worked really well for this particular mix, but I don't know if it would work on others. I also have a recipe for doctored-up cream cheese frosting from a can-- with no Tofutti! My store doesn't carry it and it seems expensive so I never get it but this frosting is delicious without out it! 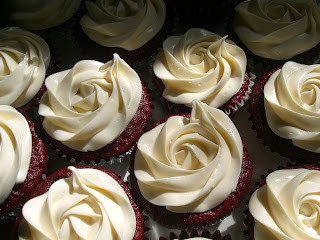 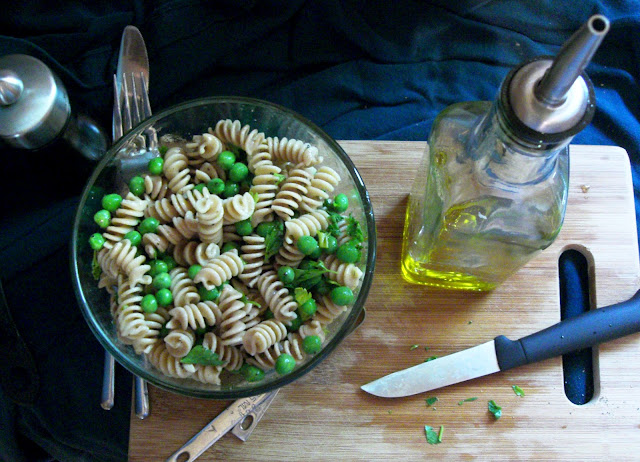 I haven’t posted many savory recipes yet because I’ve been mostly living off of cupcakes and ramen noodles lately. I just haven’t been feeling the cooking vibe—this may have something to do with the fact that my kitchen needs serious cleaning. But I did make a dressing today that is really delicious on noodles, barley, or whatever other grain. I like to add veggies and beans and call it a meal, and if the grains and beans are already cooked its very quick. This dressing is inspired by OhSheGlows though I can't find the recipe I originally adapted it from.
Recipe:
Spicy Lemon Dressing
Ingredients:
6T olive oil
6T lemon juice
2T water
2 t apple cider vinegar
1/2 T fresh ground black pepper
1/2 T salt
1 tsp cumin
1/2 tsp cayenne pepper
1/2 tsp garlic powder
Directions:
Combine everything in a jar or salad dressing container, secure the lid, and shake. Eat on everything. Enjoy!
Per 2 T: cals: 110kcal | fat: 11.86g | carbs: 1.49g | prot: 0.20g
Today I had this with some whole wheat rotini, frozen defrosted peas, and parsley for lunch. It was super yummy and refreshing!
Posted by Kelsey at 8:34 PM 2 comments: 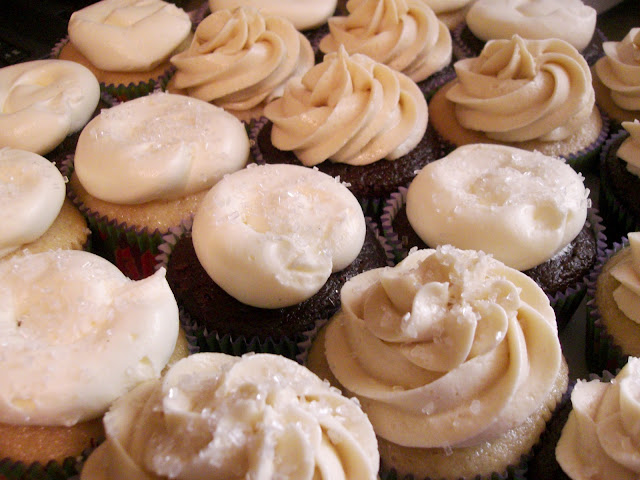 I made cupcakes! These are for a friend of mine-- her birthday is today! We have a city league kickball game today and I'm bringing these to the game. I found these super cute sports-themed cupcake liners at the store and thought they'd be perfect for bring goodies to a game and now that a birthday has come up, it's perfect timing. 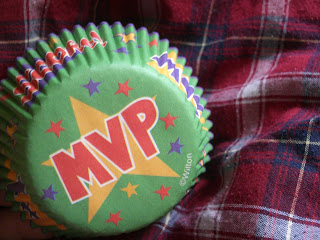 I made chocolate and vanilla cupcakes with vanilla buttercream and brown sugar buttercream. The ones with sprinkles have a chocolate truffle center.
I made everything a day in advance and then just assembled today. I would definitely recommend making at least the vanilla cupcakes in advance-- they tasted funny at first but taste great the next day! 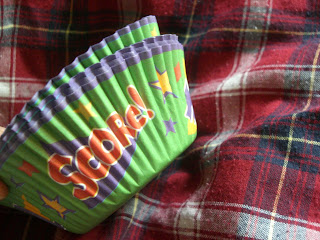 Recipes:
Vanilla cupcakes I got from here.
This recipe made 14 cupcakes, which took about 17 minutes to bake at 350 F.
For the chocolate cupcakes I used the recipe from my rose cake here.
This made 10 cupcakes which baked for 15 minutes at 350 F.
The truffle center was my own recipe as follows:
Ingredients:
4 ounces baker's unsweetened chocolate
3/4 cup semisweet chocolate chips
3 tablespoons corn syrup
2 tablespoons margarine
1/2 cup soymilk
1/4 cup powdered sugar
Directions:
Chop the chocolate and add to a bowl with syrup and margarine. Heat soymilk and pour over chocolate. Stir for about a minute until chocolate is dissolved then add powdered sugar. Refrigerate until completely chilled. This will make way more than you need for 1/2 the cupcakes (maybe not too much more if you do all of them) but more truffle filling is never bad, right? Just roll into balls and roll in cocoa powder and you have homemade chocolates! 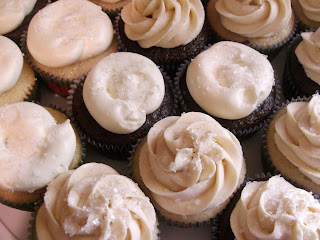 For the brown sugar buttercream I used the recipe from here. I added about 3/4 tsp molasses because it wasn't brown-sugar-y enough for my tastes and I think it turned out great!
And for the vanilla buttercream I just used a hand mixer to mix together 1/4 cup shortening with 1/4 cup margarine and beat in about 1 lb powdered sugar and 2 tablespoons of water. You can also add vanilla extract or bean, but I was out of both-- so I guess mine's just kind of neutral buttercream, not vanilla after all.
Assembly:
I used 20 of the 24 cupcakes because that's all that would fit into my cake carrier. I cut a cone-shaped piece out of half of the cupcakes (5 chocolate and 5 vanilla) and molded some of the truffle ganache into a cone to push into each one. 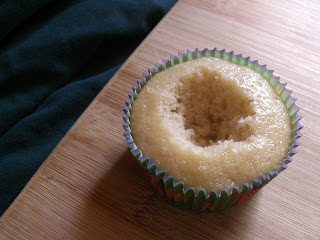 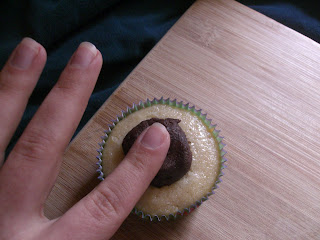 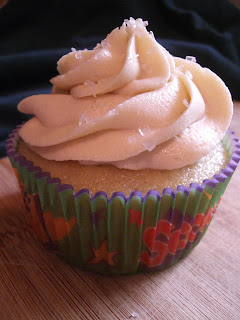 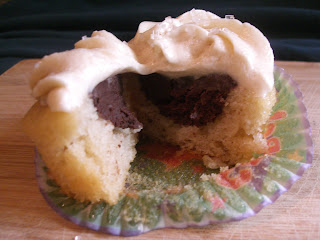 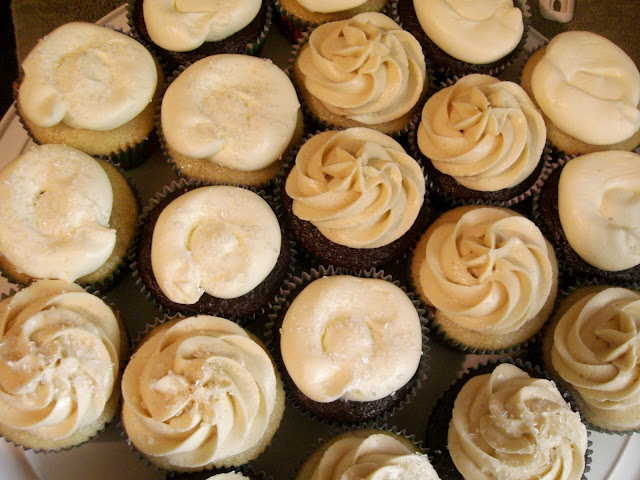 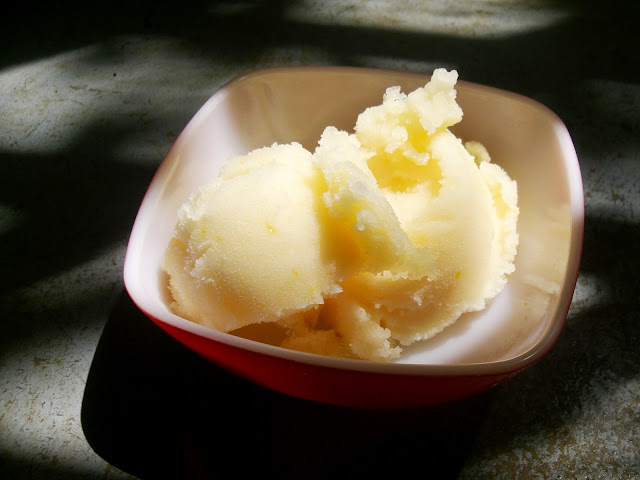 It's been forever since I've posted. I was really sick and then really busy but things have calmed down now-- thank goodness! This is what I chose to do with my first minutes of freedom. It is just ridiculously good. I had some champagne hanging around from Valentine's Day that had lost it's fizz, so I didn't really want to drink it, but I didn't want to waste it either. If you made this with a fresh bottle, it might retain some of it's fizzyness-- that would be amazing. Anyway, this is amazing too.
Champagne Citrus Sorbet
makes 5 .5 cup servings
Ingredients:
1.5 cups champagne, divided
.5 cup sugar
1 T corn syrup
1 cup freshly squeezed grapefruit juice
.5 cup freshly squeezed orange juice
juice of 1 lemon
1 tsp zest (from just grapefruit or mixed)
Directions:
Notes:
Enjoy!
cals: 176kcal | fat: 0.10g | carbs: 31.55g | prot: 0.51g
Adapted from here http://simplyrecipes.com/recipes/champagne_sorbet/ and here http://userealbutter.com/2012/01/05/pink-grapefruit-champagne-sorbet-recipe/
Posted by Kelsey at 1:49 PM No comments:

Kelsey
Texas, United States
My name is Kelsey and I love food and cooking. I am constantly adapting recipes to be as healthy as I can (so I can splurge later!) with a limited budget and to fit with me and my husband's tastes and food allergies. Most of the time, I end up making us totally separate meals, but it works for us. We have 3 amazing rescued dogs and 2 sweet cats that are so much fun. We're working hard to start our lives together. I hope this gives you an idea about me- I'm not sure what else to say!